The logo of Zen Garden at Whitford is a Chinese character that looks like a mountain range. It means “mountain” and is pronounced “shān”. This character was created during the Shāng dynasty (between 1556 and 1046 BC).

Chinese script is one of the oldest and most widely-used writing systems in the world. Known as an ideographic writing system, because many characters were originally drawings of objects (pictograms), it dates back more than 5000 years.

Zen Garden at Whitford also uses a seal that expresses our Chinese name. Translated, the seal means “Pine and Cedar Estate”. We use our seal on letters, below the signature area.

The art of Chinese seal engraving began in the Shāng dynasty, when seals were used to verify identities. Later they became a way to express good reputation by signifying “power and trust”. Seals come in many different shapes and forms, but most are square, rectangular or circular. The characters shown in a seal could be a title, a person’s name, a wish, a picture or a logo.

In ancient times, seals were crafted from brass, jade and ivory. Today, they are made from hard stone. The engraving process is highly specialised; it takes many years of training to become an accomplished seal engraver.

The hand-carved stones bearing our logo and seal are kept securely in the office of Zen Garden at Whitford. They can be viewed on request. 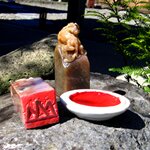